Spend AU$200+ and get FREE Standard Postage within Australia* 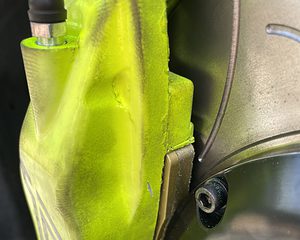 In Stock
Order by 2PM weekdays for same-day dispatch

HFM.Parts 326mm Two Piece Rotors are visually stunning with an aluminium hat made of aircraft grade T4-2024 aluminium that have been heat treated for extra strength and longevity. The design allows the rotors to expand & contract with changes in temperature and rotational mass to dissipate heat quickly for optimal performance.

In an attempt to create a lightweight rotor and considering the outer ring is the heaviest component, we’ve enlarged the aluminium centre hat as much as possible so that we could reduce the rotor surface. This means that the centre hat sits quite close to the brake pad. We recommend linishing a very small portion of the brake pad to accommodate for this. (photo example shown above)


Whats in the Box

Q. Are these rotors directional?
A. No, you can install them on either side of your car without affecting performance.

Q. My rotors arrived pre-assembled, does that mean I can install them right away?
A. Although our rotors arrive pre-assembled, we always recommend checking all of the bolts are tight prior to install. We suggest using a torque wrench with settings at 13 – 15 ft lbs.

Q. Does linishing the brake pad reduce the rotors performance?
A. No. You’ll only need to linish ~1-2mm of brake pad/pad backing plate. Because the contact surface is virtually the same and we’ve reduced the rotors weight in doing so, you will have the same braking performance.

Modifying vehicles is a specialist task and requires the knowledge and experience of competent individuals to be conducted safely.
We recommend this product be installed by a competent person. Instructions are given with every order where available, however, If you would like a copy prior to ordering, you're welcome to contact us: Go to Contact Page