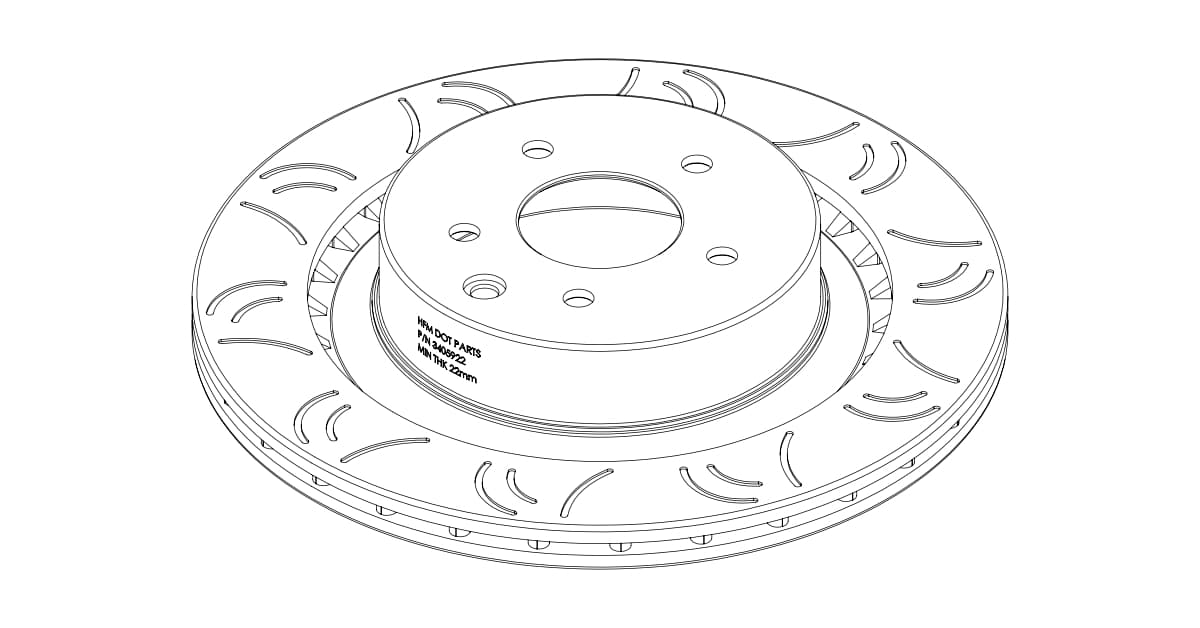 There’s going to be a lot happening at HFM this coming year. They’ve spent this year working hard to upgrade all their existing products based on customer reviews and of course, their own ideas, which is really good to see.
One example of this has to be their Nissan BM57 which has received a fairly significant upgrade in appearance as well as functionality.

I was able to grab Dom’s attention today for a quick interview about his latest brake kit. For those who don’t know, Dom is the resident mechanic and founder of HFM Dot Parts.

What kit are you working on at the moment?
“A 340mm x 22mm rear brake kit to suit r32,33,34 GTR which run Brembo calipers. Which is 40mm larger in diameter than a standard GTR rotor.”

How did you get the idea?
“It was actually a customer who came to me and they were wanting to use our 337mm Rear Rotor Kit on their GTR, which it doesn’t normally suit, I thought I’d take a quick look anyway but eventually we worked out it just wasn’t going to work. I couldn’t get the idea out of my head so I started working out how we could actually do it, especially since we don’t have any kits that use a Brembo caliper at the moment and we starting working out a kit from there, starting with the rears.”

What are some of the features of the kit?
“We’re trying to keep the same appearance for all of our rotors. Originally, we had a few different designs and once we figured out which were the most liked and best designs, we decided to stick with them so you could have a uniformed look for your car.
It’s quite a big rotor and we’ve got our new pillar vein design inside and vents on the face of the rotor instead of on the back. The idea behind that is to get the most airflow through the veins with the least interference. We’ve had a lot of feedback that our large rotors do provide increased braking performance, so we’re going with what people want which is bigger brakes. Of course, they look pretty cool too!”

Is it different to your previous rear brake kits?
“Yes, most of our brake kits were designed to be used with OEM Nissan calipers. That was to keep all of our kits affordable. It can be quite costly to upgrade calipers. We had a lot of request from people who owned GTR’s or who had GTST-T’s and had Brembo brakes – you’re probably not going to want to pull them off once on so we could never help out those customers. Until now.
So, now we have a kit that was specifically designed to be used with Brembo calipers for those who have changed their calipers and for GTR’s who have Brembo as standard.”

Is it replacing an existing kit?
“No, we don’t have anything like this kit out at the moment. Like I was saying, It’s our first kit that allows you to use Brembo calipers if you have them. And for those who have standard Nissan calipers, we have kits for those too of course.”

How long does it take for you to make a new kit?
“That’s a tough one. If I have an idea or if I get a lot of requests for the same type of kit, that’s the first part done. You really need to have your own ideas.
Then you have to work out HOW to actually get that to work. Sometimes it takes me just one afternoon and other kits have taken a little more thought. After the initial concept has been planned out, we get engineers to go over the idea and ensure structurally it’ll work and designers to make it look good, make sure it fits our brand, things like that.
There’s first design, perhaps a second design and then the prototype, if the prototype is good then we head on to production. That part can take 2-3 months on its own. Then you have packaging too. So, Yeh, it’s a lot to figure out”

What will this kit be available?
“We’re looking to release the new kit End of Jan to Early Feb 2019. That’s to allow time for production and testing.”

This new brake kit will be released on Facebook as soon as it becomes available but if you’d like to stay in the loop, you can email sales@hfm.parts with any questions or to be put on the waiting list.